iva korbar
As the Eurozone fell back into recession in 2011 and 2012 and austerity measures such as tax rises with cuts in salaries, pensions, benefits and social services in order to cut already huge government debts were introduced among European countries, the term recession was frequently heard in a public space. The term Recession was to be questioned with the starting thesis that at the bottom line of recession lies only the recession of Spirit. 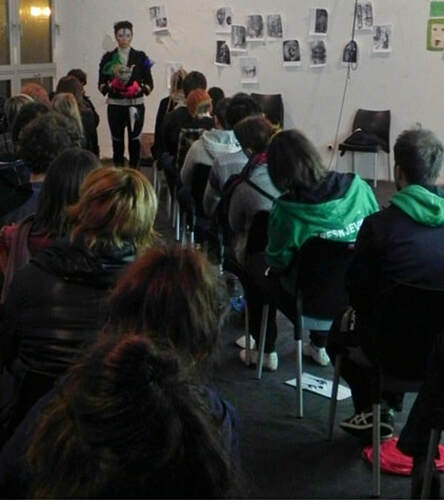 This play, set as an interactive show was to check what was happening with people's drive to stand for oneself and their spirit. Investigating if this drive derives from something we perceive as Spirit which builds up knowing oneself and one owns potentials, self-confidence, boldness and vitality that abolishes individual and collective half-heartedness, doubt and apathetic state of being brought by high rated unemployment in society.
The Recession Theatre was played several times during Carnival time in Zagreb, and masks were used to question the power of social masks. The masks were created prior to the play by the participants themselves and then reused in the interactive shows again. The Recession Theatre took part in a half-adapted hall of a former fabric for machines (Tvornica Jedinstvo) that bankrupt during the ‘1990’s due to privatization and corruption affairs. Prior to its final closing the workers of the fabric performed a strike – a work strike: they weren’t willing to stop their work and leave the fabric. Participants of the interactive show The Recession Theatre were forced to prepare their own stage in order for the show to start working. Later on they were trying to answer questions about the recession phrased as koans. The sequences of the play were interconnected by physical theatre movements with which the actress and the moderator of the show communicated with the participants.
Powered by